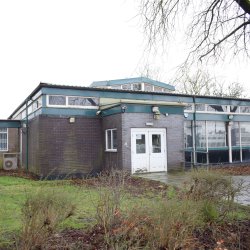 The buildings is located facing the Audenshaw interchange fronting Manchester Road, close to Snipe Retail Park, and forms part of Ryecroft Hall Park, which was gifted to Tameside Metropolitan Council in 1922. It is approximately 0.7 miles from junction 23 of the M60, 1.8 miles from Ashton under Lyne town centre, and 4.5 miles from Manchester city centre. The Metrolink system runs close by with the nearest tram stop immediately opposite the property.

A detached and self-contained former library premises, which is part of the Ryecroft Hall Park, and now available to lease. The property comprises a garden area to the front, fenced area to side, which has previously been used as a children’s play area, and two separate buildings. The main building is the former Audenshaw Library, and comprises a series of rooms ranging in size, along with staff and visitor facilities. The smaller, separate building to the side houses a kitchen and store room.

Previous uses since the library relocated have included a pre-school and nursery, and alternative uses including office, leisure, nursery, gym etc. will all be considered.

Some parking is available on site, along with on street parking.

Selling, letting and acquisition of commercial and industrial property.

We advise and act on behalf of Landlords and Tenants.

Ranging from complete management through to consultancy management.

Chris, many thanks for your work in dealing with the two property sales on behalf of the Circuit. I have been very pleased with your services throughout the prolonged and sometimes frustrating process

Joanne, Chris and Glenn undertake all I ask.  Despite market conditions Breakey & Nuttall continue to let my industrial units and always conduct business to the highest professional standard.  The knowledge and experience the firm have can assist anyone in the commercial property market

Joanne, thank you for the exceptional service you provided in sourcing and advising me on my new office. Having never leased commercial premises before, you clearly explained the process and negotiated terms on my behalf, putting me at ease. I have absolutely no doubt without your input I would ha… END_OF_DOCUMENT_TOKEN_TO_BE_REPLACED

Chris, we don’t know who we would have turned to without your help and support

Thank you for providing Swinton Group Limited with an outstanding service in respect of a disposal of surplus property in Shaw. The sale was handled professionally and diligently throughout and Glenn’s tenacity resulted in the transaction completing successfully for both seller and purchaser.  It… END_OF_DOCUMENT_TOKEN_TO_BE_REPLACED